Sometime ago, I did a post on Amaze-ing Words Wednesday about wordsmith Mark Twain that included 25 favorite quotes from him. I titled it If Twain Tweeted because wouldn’t it be awesome if some of these brilliant minds had been on Twitter way back when? Moreover, I think we can learn a lot about the effective use of language from those who do it so well. 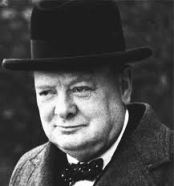 Another favorite of mine is Winston Churchill, who was the master of The Perfect Comeback, and whose brilliance and wit has long been noted — whether or not one agreed with his politics. So today, let’s imagine that the British prime minister is sitting at his desk with a smart phone in hand and sending out a little word wisdom to the rest of us. Here’s my collection for If Churchill Tweeted, with 23 quotes of 140 characters or less:

Note: It has been debated whether some quotes attributed to Prime Minister Churchill were his own. I tried to find more than one source for the quotes; however, it’s possible that something here was not his statement after all or that a word or two is out of place.

Who are your favorite wordsmiths? Which Churchill quote did you most enjoy? Do you know of others I should have included?

The story has been told many times.  Nancy Astor, the first female member of British parliament, so disliked Prime Minister Winston Churchill that she once shouted at him, “If you were my husband, I’d put poison in your coffee.”  Churchill, a master of wit, quickly responded, “If you were my wife, I’d drink it.”  Now that’s a comeback.

There are times we desperately wish that the perfect words would all come together in a flash of brilliance and pour forth out of our mouths with all the bite we wish to deliver to an offending party.  If you’re like me, however, the Perfect Comeback usually arrives at my brain hours after the train has left the station.  “Ooh, I should have said…!” but I didn’t.

The Perfect Comeback can take the sting out of another’s rudeness, repay someone for an ill done to you, or just settle a score.  It is different from an insult, in that it is a reaction to what has come immediately before.  You can’t prepare.  Which makes the Perfect Comeback all the more wonderful when aptly delivered.

Although you have to be careful:  In high school, I was once insulted in the school cafeteria, and the Perfect Comeback managed to float right off my tongue and sting that ol’ meanie like a swarm of wasps.  I was feeling pretty dang proud of myself.  I stood taller, turned to strut out, and promptly ran into a large column.  Humility returned.

So what are some of the best comebacks of all time?  Winston Churchill was so good at these that I could fill the entire post with some of his zingers.  But I will give my Top 10 List with some variation:

10.     In his early career, Winston Churchill attended a meeting at which another parliament member gave a long-winded speech. Churchill closed his eyes to fall asleep.  Seeing Churchill’s behavior, the speaker became angry and shouted: “Mr. Churchill, must you fall asleep while I’m speaking?”  Churchill merely replied:  “No, it’s purely voluntary.”

9.       Just after the 1992 Republication National Convention, Vice President Dan Quayle revealed that he planned to be “a pit bull” in the upcoming campaign against the Democratic presidential candidate Bill Clinton and running mate Al Gore.  When asked for his reaction, Clinton replied: “That’s got every fire hydrant in America worried.”

6.       Muhammad Ali was known for his arrogance.  He once took a flight on Eastern Airlines in the 1970s. As a flight attendant made her final checks, she noticed that Ali failed to fasten his seat belt.  She asked him to buckle up, but Ali answered, “Superman don’t need no seat belt.”  The flight attendant smartly replied, “Superman don’t need no airplane either.”

5.       After James II assumed the throne following his brother Charles II’s death in 1685, Charles’s son led a rebellion against the new king.  The insurrection failed, however, and the rebels were brought to trial before Chief Justice George Jeffreys.  At one point in the trial, the judge thrust his cane in the chest of one of the rebels and charged, “There is a rogue at the end of my cane!”  Facing death on the gallows, the defendant probably figured this was his last chance for a great comeback and thus asked, “At which end, my Lord?”

4.       The Conservative Winston Churchill once entered a men’s room to find Clement Attlee, leader of the Labor Party, standing at the urinal. Churchill took a position at the other end of the trough.  “Feeling standoffish today, are we, Winston?” Attlee asked.  “That’s right,” Churchill answered.  “Every time you see something big, you want to nationalize it.”

2.       Despite the fact that Spencer Tracy and Katherine Hepburn had a long-lasting relationship both on and off the screen, it got off to a rocky start in their first film Woman of the Year (1942).  The tall Ms. Hepburn haughtily said upon meeting the stocky Mr. Tracy, “I’m afraid I’m a little tall for you, Mr. Tracy.”  Spencer Tracy retorted, “Not to worry, Ms. Hepburn, I’ll soon cut you down to size.”

1.       Mark Twain was quick-witted at every turn, and once again in a debate with a polygamist, Twain’s words trumped his opponent.  Having argued the issue of polygamy for some time, the polygamist Mormon forcefully asked, “Can you cite a single passage of scripture which forbids polygamy?”  Twain responded, “Certainly.  No man can serve two masters.” (Matthew 6:24, by the way.)

If you want to read more about perfect comebacks, check out the following websites:

Political Comebacks:  The Art of the Putdown

Also, I highly recommended Viva La Repartee by Dr. Mardy Goethe.  He has done extensive research into witty comebacks across history and does an excellent job of relating them in a quick read.

Now what are you favorite comebacks?  Did you ever deliver a Perfect Comeback?  How did that feel?  How was it received?  (Did you actually say, “Bazinga!”?)  What do you think is necessary for the Perfect Comeback?