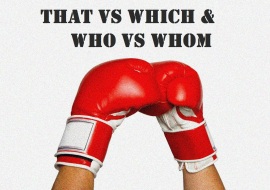 Have you ever written a sentence and stopped to think, “Is it that or which? Which? That?” Sorting out which/that and who/whom can leave even the most grammar conscious scratching their heads. However, today on Amazing Words Wednesday, we’re going to try to sort it all out.

Let’s start first with deciding whether you need to use that/which or who/whom. How about the following sentence?

The guy ____(who/that) asked me out looks a lot like Hugh Jackman.

Would you fill the blank with who or that?

If you are certain that it is a person, use who. It’s more specific. In conversation, you may find people using that, but when writing you can be more accurate.

But what about an organization? The Supreme Court is now treating corporations like persons. Should the English language do the same?

Did you use who or that?

In spite of the Citizens v. United decision by the Supreme Court, companies are not people. They are not who. A company is a collective noun, or more specifically a thing, and thus can be referred to as it. For instance, a team is the same way. You would say of a team that it did better this year than last. So the correct choice with a company, team, etc. would be that.

However, we don’t usually even talk that way. To be precise, you may wish to say, “The Texans, who did better this year than last, still didn’t make it to the Super Bowl.” In this case, you have avoided that less precise collective noun and recognized that players (aka people), are really the ones who did well (but not well enough).

Now let’s distinguish when you should use that and when which is more appropriate.

Restrictive versus nonrestrictive is the primary issue here. Clauses within a sentence are restrictive if they are necessary to the meaning of the sentence. In this case, the proper word to use is that. Here are some examples:

The way that he looked at his watch gave me the impression that he wanted this date to end.

The final straw that sent me storming out was when he took a phone call from his ex-girlfriend.

In both cases, the clause in italics is pertinent to the message of the sentence as a whole. It communicates necessary information.

Contrast that with a non-restrictive clause, which provides perhaps interesting but unnecessary information:

He kept looking at his wristwatch, which was a pretentious gold-and-diamond Rolex, throughout our date.

This evening, which reminded me why I hated first dates, made me swear off dating for a good six months…or at least six weeks.

In these examples, the sentence would have the same essential meaning without the italicized phrases, and thus use the word which. It is also why the phrases are set off by commas.

Of course, it isn’t always this easy to spot. Sometimes you may need to pause and ask yourself whether the information is extraneous or integral to your primary meaning. A phrase introduced by which may still be important, even if it isn’t necessary to that particular sentence. Sometimes, it’s a judgment call.

The lights that would indicate someone was home were smashed.

The lights, which would indicate someone was home, were smashed.

Which is right? In this case, I think it’s up to the writer. What meaning do you wish to emphasize? Using that or which gives the reader a subtle clue.

Finally, let’s look at the use of who versus whom. This one is easiest to determine if you use the replacement principle. Who is a subject, like he/she/they. Whom is an object, like him/her/them. So if replacing the word with a specific would require he, she, or they, who is the word you need. If instead, you would use him, her, or them, go with whom.

All too often, the order is what throws us for a loop. Test yourself with this these:

_______(Whoever/Whomever) you date will end up as an ex or your lifelong mate.

These are harder, right? I suggest using the same replacement principle, but extending it. Try both out:

Reading it aloud, hopefully you cringed at “whom buys.” So in this example, whoever is the way to go.

The second example can be determined the same way:

A little less clear, but it’s whom. You date him, not he. You is clearly the subject and whomever is the object.

Did that clear anything up? Or just confuse you more? Do you have any tricks for keeping who/whom and that/which straight?

Thanks to Karen Rought for suggesting the topic. It’s a tripper-upper indeed.