Welcome to More Cowbell Sunday! Author Jenny Hansen has a blog called More Cowbell. If you don’t get the reference, it’s based on a Saturday Night Live skit that went viral and spawned the phrase “more cowbell.” (See video here.)

Recently, Jenny hatched a plan to send her own cowbell on a series of adventures, a la Flat Stanley. I was happy to raise my hand for a turn, and Jenny passed the cowbell to me while at DFW Con so it could begin its first adventure.

Here’s how the cowbell spent time in the Lone Star State!

First, Cowbell and I stopped off at the famed Lamb Ranch, where WANA Mama Kristen Lamb served up a heap of Southern hospitality.

After a fun-filled conference, though, Cowbell was awfully tired, so he rested for a spell.

The next day, we were both ready to do some riding on the ranch. So what does one ride on a Texas ranch? Why, an ATV, of course!

After I rested up from the trip, it was time to get back to my regular schedule. In my house, that involves baseball games. Cowbell was ready to cheer my son’s team on!

Yep, that’s my son on the pitcher’s mound behind the cowbell. And sure enough, with the charm of the cowbell, my son had several strikeouts.

On Saturday, Cowbell begged to go to the annual Art Car Parade in Houston with my other son. But unfortunately, he was just too heavy to be lugged around the parade route by the kids. Since Grandma was the adult taking them, she had her hands full enough already. Here’s some of what Cowbell missed.

But we made up for missing the Art Car Parade by taking Cowbell out on Friday night. We got gussied up with a hippie cowgirl look.

And headed to the Longhorn Steakhouse for a juicy slab of beef.

Then we stopped for a few minutes to listen to the Old Rascals Band in my town of Friendswood, Texas–as part of the summer series of Concerts in the Park.

There was one final stop for Cowbell a couple of days later. I have an annual tradition with my best friend of taking one day in the year and heading to the beach…while our kids are at school. We’d been looking forward to this day for a long time. And Cowbell got to come!

We had a fabulous time frolicking in the Galveston sand and Texas Gulf waves.

Our Lone Star adventures had come to an end. It was time for Cowbell to visit someone else. So I said my goodbyes and sent Cowbell on to Ellen Gregg for its next stop in the Cowbell Chronicles!

We really do need More Cowbell! Thanks, Jenny.

It’s Deep-Fried Friday, and boy do I have a sizzling something for you today! Yesterday on her blog, author Jenny Hansen announced a party! But before I give you the deets about that lovely event, let’s take a look at the lonely road of writing.

When I wrote my first novel, I was like the main character in the movie of Cast Away. Remember that flick with Tom Hanks and his volleyball friend “Wilson”? Check out a quick clip from the movie:

That’s how many of us live on writer’s island. We have an imaginary friend or two we chat with, we diligently work at our craft, and we celebrate alone when we achieve something. Sure, it’s great that we wrote a book, but the endeavor involved just one person and no one was there to make or enjoy the fire with us. Even introverts, like me, can get lonely and feel a little lost.

Now let’s head to another island… 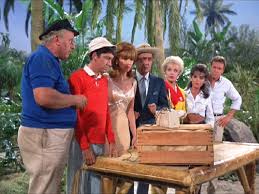 I grew up watching Gilligan’s Island…I mean, a LOT of Gilligan’s Island. To the point where you I can see the first scene and say things like, “This is the one where they put on a play, but Mary Ann gets hit in the head with a coconut and thinks she’s Ginger, so then Ginger has to be Mary Ann, and then . . .” I can also sing ALL of the lyrics to the theme song. Despite the years of mockery this show has endured, it has, well, endured.

Because Gilligan’s Island might actually be one of the best ways to be on a deserted island–with others. Sure, these people didn’t know they could become friends, but throw them on a tropical island with a broken boat, one radio, and a whole lot of palm trees, and pretty soon they’re doing okay. They want to be rescued, but as long as Ginger’s sequin dress lasts, they could stay a little longer.

Imagine Hanks with that fire. Wouldn’t that have been more fun with Gilligan and the gang? They could have danced a conga line around that bonfire!

When I started writing, I was on Cast Away Island. Then I found friends online–mainly through the We Are Not Alone (WANA) world. Kristen Lamb, Social Media Jedi and fearless leader of WANA, has helped to link hundreds of writers to each other and to readers. After reading her book and taking her class and following her advice, I have met–online and in person–some of the most supportive writers I could imagine. They are much more fun than Wilson.

Just like on Gilligan’s Island, WANA Island has writers with a wealth of knowledge like the Professor; some with fabulous resources like Thurston Howell III; some with constant encouragement and kindness like Mary Ann; and some who’ll share book-writing tips with you like Ginger. In fact, this crew is better than Gilligan’s Island because I’m pretty sure if we were all stranded, my WANA friends would have a tiki bar up in no time serving up whatever you would like. The raft would be already made and sitting off in a corner ready for us to embark as soon as we were done having our fun.

I cannot stress how much I have learned and been encouraged by my relationships with the WANA (and ROW80) folks. If you want to bring in the New Year right, come join us for a TGI2013 Twitter party today from 5:00-9:00 CST at the #MyWANA hashtag!

Check out Jenny’s post with the details at her blog, More Cowbell.

And see the current course line-up for WANA International.

Meanwhile, if you’re a WANA, let me know in the comments what this group has meant to you. And if you’re not, ask me anything about WANA, and I’ll try to answer as best I can.

And be sure to pop in tonight at the #MyWANA hashtag for our TGI2013 Twitter party!

It’s an Amaze-ing Words Wednesday special! I had an interesting comments conversation with Jenny Hansen of the More Cowbell blog on Natalie Hartford’s Life Out Loud blog. Following my comment about the blog post itself…

Julie, if they let ME teach Sunday School (and they do), I assure you they will always let you sit in the front row at church.

And do you really see Lone Star beer cans in your roadside armadillos??! That means the road killer would have to stop the car and put said can in the paws of the road killee. Am I the only one who finds that bizarre?

Yep, we had a menagerie of maniacal laughter over here – naked armadillos and Bengal Tigers!