Welcome to  Apocalypse Words Wednesday! It’s a special edition for the day we enter the labyrinth of language and see what we can find.

Let’s say you want to talk about the end of the world. Perhaps you’ve been watching zombie shows, re-viewing Terminator or Independence Day, or you’ve decided that the recent reports of spying by the NSA is a harbinger of government takeover a la Hunger Games and you want to make sure you’re ready to compete for your district.

What will you call this event that brings about “the end of the world as we know it”? Let’s take a look at some options and their origins.

Apocalypse derives from the Greek word apokalyptein, which means to uncover or reveal. Apokalyptein is the title of the last book of the Christian Bible, in which the end of the world is foretold. When the Greek New Testament was translated into Latin, the word became apocalypsis. In English, it’s now the Book of Revelation, but the word apocalypse was anglicized and became associated with the end times themselves.

Armageddon is not just a Def Leppard song title. Armageddon is the Greek translation of the Hebrew Har Megiddon, also known as Mount Megiddo. Megiddo has been the place of many historical battles, including one in World War I between Allied and Ottoman armies. Armageddon is mentioned just once in the Book of Revelation as being the place where a “battle on the great day of God the Almighty” will take place (see Revelation 16:16). Consequently, Armageddon has come to generally mean “the final battle”–whatever that final battle looks like.

Doomsday. “Doom” appears in the late 14th century, coming from the Old English word dom, meaning law, judgment, or condemnation. In Old English, a book of laws was called a dombec. So the last day, the “judgment day” would be a day of doom. At least for those who haven’t been behaving, right? Doomsday is simply a portmanteau of doom and day.

Judgment Day. Not much to say here. From the above, you can figure out where this came from. Revelation 14:7a: “[The angel] said in a loud voice, ‘Fear God and give him glory, because the hour of his judgment has come.'” And then you get the rest: It’s a great day for some people, and a really bad day for others.

Reckoning. The use of reckon I hear the most is, “I reckon that” followed by the opinion of the Southerner about one thing or another. But reckoning appears around the late 14th century and means settling accounts. The Day of Reckoning crept into usage about 1600. Now I reckon the Reckoning is a good name for the end of the world as we know it–whether by zombies, machines, world war, etc.–because some accounts will be settled, one way or another.

Firelands. Here’s another fabulous word you should associate with apocalypse. Piper Bayard recently released her first novel, FIRELANDS. It’s a post-apocalyptic story, and it’s been causing some buzz. Here’s the blurb: 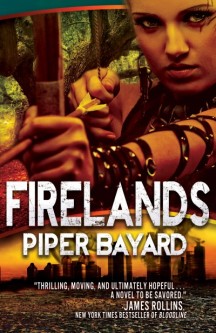 Eighty years in the future, America has devolved into a totalitarian theocracy. The ruling Josephites clone the only seeds that grow in the post-apocalyptic climate, allowing their Prophet to control who eats, who starves, and who dies in the ritual fires that atone society.

Subsisting on the fringes, Archer risks violation and death each day as she scours the forest for game to feed her people. When a Josephite refugee seeks sanctuary in her home, Archer is driven to chance a desperate gamble. A gamble that will bring down the Prophet and deliver seeds and freedom, or end in a fiery death for herself and for everyone she loves.

Available from Amazon in Paperback and on Kindle.

Also in e-book at Barnes & Noble and Kobo,

and at iTunes for iPad and mobile devices. 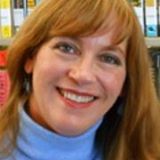 Piper Bayard is an author and a recovering attorney with degrees in writing and law. She’s also a belly dancer from way back, and she currently pens post-apocalyptic science fiction and spy thrillers when she isn’t shooting, SCUBA diving, blogging, baking cookies, or chauffeuring her children to their various teenage immediacies. She blogs with her spy thriller writing partner, Intelligence Operative Jay Holmes, at Bayard & Holmes.

What do you call the “end of the world as we know it”? How do you think it might happen?