Welcome to Amazing Words Wednesday, the day we enter the labyrinth of language and travel down an interesting path together. Today, I’m thrilled to have K.B. Owen, author of the upcoming release Dangerous & Unseemly. I absolutely adore her blog with its historical insights and humor, and I’m eager to read her historical mystery. Take it away, Kathy!

The spiritualist movement gained in popularity just after the American Civil War, when spirit mediums sprang up like crocuses after a winter thaw.  Perhaps it shouldn’t be too surprising, since the prolonged, bloody conflict left families mourning their dead and widows rebuilding their lives, raising their children alone.  A skillful spirit medium would certainly hold fascination under those circumstances.

When you think of someone being a “spirit medium,” what gender comes to mind?  A woman, right?  You would be correct!  Although there were male mediums, the nineteenth century spiritualist movement was dominated by women.  Even the clubs, retreats, and societies that followed the spirit world were primarily made up of women.

To answer that, we have to consider what having “spiritual powers” would mean to a 19th century woman.  For her, it would be access to another kind of life:  fame, money, travel.  She could escape from her limited domestic sphere, where her legal rights were few, and responsibilities were many.  When she was “channeling” spirits who spoke through her, she could freely say what she thought, and the naughty spirit would shoulder the blame.

Mediums worked wherever the money and the gullible could be found.  The biggest money-making venue for spiritualist performers was the stage.  Mediums, magicians and mind readers played up the glamor and drama of their special access to the spirit world.

But to put on a truly good show, you need props, right?

For Julie’s Amazing Words Wednesday, I’ve put together a few terms for the devices and tricks used by 19th century spirit mediums.

Planchette:  In the picture above, you see the little heart-shaped thing next to the Ouija board?  That’s the planchette.  When used in tandem with a Ouija board, it acts as a pointer, coming to rest on the various pre-printed letters and words to convey a message.

However, in the late 19th century, the Ouija board wasn’t widely available yet (Elijah Bond and Charles Kennard applied for the patent in 1890), so the planchette – or “talking board” as it was also called –  was used alone.  In its stand-alone form it was much larger, with a hole for a pencil at its pointed end (instead of a viewing window) and tiny wheels on its base.  Paper was placed on the table beneath the board, and the pencil could then trace out “spirit writing” in answer to questions.  The sketch below gives a better idea of what a 19th century planchette was like:

Planchettes were also sold in toy and novelty shops as harmless parlor entertainment.

Séance Tables:  special light-weight tables which were said to rotate, float, or levitate when spirits were present.  The picture below (via wikimedia commons) was taken during an 1898 séance in France, and shows a “levitating” table.

Spirit Cabinet: A large wooden box, about the size of a walk-in armoire, used to conceal the performer while the “spirits” were doing their work.  The first one was built by the Davenport brothers.  They claimed that what people heard and/or saw were the workings of the spirit world.

The trick:  the brothers would be tied up inside the box, along with musical instruments that were out of their reach.  Then, after the box was closed the instruments would sound, and when the box was opened, the brothers would be in the same restrained position as before.  Other mediums used cabinet trickery to escape out the back and return to the room to pose as ghostly spirits.

Even though a lot of them were caught at it, and magicians such as Houdini duplicated the trick onstage and exposed the fraud (see poster below), the cabinet illusion remained popular for quite some time.

Spirit Photography:  A photograph upon which the image of a spirit appears after the plate is developed.  The photograph below was taken by William Mumler, a self-proclaimed “spirit photographer.”  Mumler claimed that the spirits who appeared in his photographs were only evident upon developing the picture and not visible through the lens.

Mary Todd Lincoln was one of the most well-known Victorian widows, and she was an avid spiritualist.  She even held a séance in the White House after her son, Willie, died in 1862.  After her husband’s death, her dedication to spiritualism only deepened.

Spirit Rapping:  A means of communication through knocking sounds.  The spirits would tap out answers to yes or no questions.  In 1848, the first recorded spirit-rapping in America took place when sisters Margaret and Kate Fox attempted to communicate with the spirits of the dead.

According to reports at the time, they succeeded in establishing a ghostly dialogue with the spirit of Charles B. Rosna. Through the rapping noises, the spirit conveyed the message that he had been killed and buried in the basement of the sisters’ home. When bones were found in their basement, the Fox sisters (including a third sister, Leah) became a sensation.  Over the years, they continued to give séance demonstrations, attracting a devoted following and a good bit of money.

But that’s not all (really, I couldn’t make this stuff up if I tried).  Lured by a reporter’s offer of $1,500 to reveal the secret, and desperate for money (they were alcoholics and drank away their profits), Margaret confessed that she had made all the rapping noises by means of a double-jointed big toe, which she could crack at will.  She demonstrated this before an audience of 2,000 at the New York Academy of Music, where doctors observed and verified it as the source of the sound.

Spirit Slates:  These consisted of two chalkboards bound together that, when opened, were said to reveal messages written by spirits.  The trick was performed by putting a blank slate on an audience member’s head, or asking him/her to hold it under the table.  Then, after a suitable interval, a chalk-written message would be revealed.  It wouldn’t be that difficult to switch out a pre-written slate, or for the medium to hold a piece of chalk in a ring and become proficient at writing under the table.

Spirit Trumpets: horn-shaped speaking tubes that were said to magnify the whispered voices of spirits so that mortals could hear them.

Julie, thanks so much for hosting me and giving me the chance to talk about one of my favorite nineteenth century topics!  It was a lot of fun.

Wasn’t that so interesting?! I love learning stuff like that. Thanks so much to Kathy, and be sure to check out her novel. 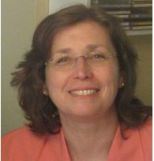 K.B. Owen taught college English for nearly two decades at universities in Connecticut and Washington, DC, and holds a doctorate in 19th century British literature. A mystery lover since she can remember, she drew upon her teaching experiences in creating her amateur sleuth, Professor Concordia Wells. Unlike the fictional Miss Wells, K.B. did not have to conduct lectures in a bustle and full skirts. No doubt many people are thankful about that.

She now resides in Virginia with her husband and three sons. She recently finished the second book in the series, and is busily planning Concordia’s next adventure. Check out her website for more historical mystery fun: kbowenmysteries.com 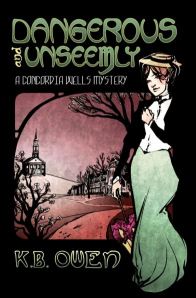 The year is 1896, and Professor Concordia Wells has her hands full: teaching classes, acting as live-in chaperone to a cottage of lively female students, and directing the student play, Macbeth.

But mystery and murder are not confined to the stage. Malicious pranks, arson, money troubles, and the apparent suicide of a college official create turmoil at the women’s college. For Concordia, it becomes personal when a family member dies of a mysterious illness, and her best friend is attacked and left for dead.

With her friend still in danger and her beloved school facing certain ruin, Concordia knows that she must act. But uncovering secrets is a dangerous business, and there are some who do not appreciate the unseemly inquiries and bold actions of the young lady professor. Can she discover the ones responsible…before she becomes the next target?

Absorbing in its memorable characters, non-stop plot twists, and depiction of life in a late-nineteenth century women’s college, Dangerous and Unseemly is a suspenseful and engaging contribution to the cozy historical mystery genre. Fans of Harriet Vane and Maisie Dobbs will find in Concordia Wells a new heroine to fall in love with.

How about a little mystery fun…and a prize! Each stop in K.B. Owen’s book launch tour has a mystery question to answer. When you have them all, unscramble the answers to which ROOM, WEAPON, and SUSPECT, and email Kathy at kbowenwriter(at)gmail(dot)com. See details of the Whodunnit game HERE. She’ll announce the winner (chosen from the correct entries) at Karen McFarland’s blog, the last stop of the tour.

What do you win? A free ebook copy of Dangerous and Unseemly and a $25 gift card of your choice to either Starbucks, Amazon, or Barnes and Noble! If you run into a few stumpers – no problem! Check out her Mystery Quizzes page for links to the answers. If you’ve joined us in the middle of the tour, the complete list of Book Tour hosts can be found at kbowenmysteries.com. Good luck!

Here’s the clue from Kathy for her book-tour stop at my blog!

What trademark tune does Columbo whistle (beginning with the episode “Any Old Port in the Storm”) which the producers worked into the musical theme?

24 thoughts on “The Language of 19th Century Spirit Mediums”