Welcome to Deep-Fried Friday! For the next few weeks, I’ll be heading into the hallowed high school halls. Since plenty of families have already gone or will be soon shopping for back-to-school clothes, today’s topic is high school fashion. Fashion trends say something about each generation.

As I mentioned last week, I attended high school from 1982 to 1986, but I’ll take a general look at the 1980s teenage fashion fads. There were several looks that passed through the 80s–like the Madonna bustier-and-lace, the big hair and shoulder pads, the preppy presentation, and the fitness-craze look. Here are some of the items that made an appearance or experienced a resurgence:

Leg warmers. Jane Fonda wore them, but she didn’t make them popular with teens. It was the likes of Jennifer Beals in Flashdance (1983), the teens in Fame (1982) and  Footloose (1984), Cyndi Lauper and Madonna, and my personal favorite, Olivia Newton-John, who made us all run down for our own set of leg warmers to wear with flats, tennies, and even high heels.

Hair bows. The rule with hair bows then: The bigger, the better. Look back through 80s photos, and you’ll see hair bows on everyone from Madonna to Ally Sheedy to Whitney Houston.

Lace and more lace. Thanks to Cyndi Lauper and Madonna, who took the lead on this one, lingerie went inside out in the 1980s. Lacy camisoles became outerwear, and the lace trend extended to leggings, hair bands, and more.

Parachute pants. Say what you want, they were comfortable. They were cool enough for Flock of Seagulls and Duran Duran to wear, but of course we all know who rocked the parachute pants. Hammer Time.

Designer jeans vs. Levi’s button-fly. Designer jeans showed up in the likes of Gloria Vanderbilt, Sasson, Jordache, Zena, and Calvin Klein (thanks, Brooke Shields). Levi’s, however, got a boost in sales with their unique button-fly shrink-to-fit 501 design. While there is a 1984 Levi’s commercial in which Bruce Willis and Jason Alexander make an appearance, here’s my favorite one from that era (I still know every word):

Swatches. Swatches were cheap plastic watches with good timepieces that had fun, colorful faces and bands. They became so stylish that teens would wear more than one Swatch on their wrist. Most people owned one, and plenty of us more than one. 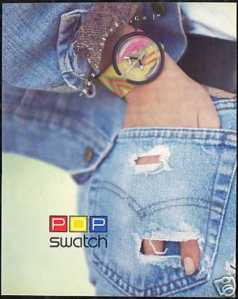 Bomber jackets. The bomber jacket look was popular with Michael Jackson, Mel Gibson, Ferris Bueller (Matthew Broderick), Mike Seaver (Kirk Cameron), and others, but for some reason it had to be a Members Only brand to be really cool. 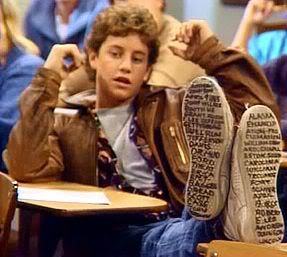 Polos and penny loafers. Hello, preppies. Ralph Lauren Polo and Lacoste Izod shirts were all the rage for a few years–with the collar turned up. In fact, some teens wore more than one polo with the collars raised. This look was often paired with penny loafers. The shoes didn’t come with the coin; you had to find a nice shiny cent and push it into the hole. My parents swore we just copied their 50s look, but somehow we all thought we had improved on it. Maybe it was the alligator on the shirt or the fact that it was likes of John Cougar Mellencamp in those loafers.

There were other fashion choices, like stirrup pants and granny boots; neon, neon everywhere; jelly shoes; twist-a-bead necklaces; and as many bangle bracelets as you could get on your arm. We watched actors and actress, musicians and singers, and fashion commercials and ads to see what was trendy.

So what’s hot on the racks now? Well, thankfully the meat dress never caught on, but here are some of the looks you might see on teens.

Loungewear. Have you noticed a lot of teens wearing what look like their pajamas? Some of them actually are wearing pajama bottoms, but there has also been a rise in the sale of lounge pants. Abercrombie & Fitch, Aeropostale, and Victoria’s Secret Pink feature the look in their stores.

Skinny jeans. Skinny jeans are everywhere, on both girls and boys. And now they come in many colors. Popular brands today include Hollister, Abercrombie & Fitch, Lucky Brand, Aeropostale, Diesel, and others. There are still Levi’s, but the commercial looks a lot different.

Bracelets and wristbands. Homemade friendship bracelets and rubber awareness bands grace the wrists of plenty of teens. Weave a few strands or pick up a band with your school team’s name, your favorite charity, or a life message inscribed on it, and you’re good to go.

Flip-flops and Crocs. Back in my day, flip-flops were called “thongs,” but now that’s a whole other thing. What’s newer about flip-flops is their versatility. They are no longer for summer wear with a pair of shorts; you can find them in various heights and styles, from casual to flashy, and they are worn with anything and everything. As for Crocs, these foam clogs rolled out in 2002 and gained a popular following within a few years.

Ugg Boots. Uggs in an Australian brand of sheepskin boots, but the term “Uggs” is to sheepskin boots is as “Kleenex” is to tissue. Other popular brands are Emu and Bearpaw. There is an ongoing debate about whether Ugg Boots and their knock-offs are passe in the fashion world, but most people agree that teens are still wearing them and since Emma Watson had them on for a recent movie…

Flat-billed caps. This is an addition from my son, who says flat-billed (aka baseball) caps are popular. Sure enough, my Internet search found examples on Justin Bieber, Taylor Swift, and Rihanna. The bill is kept flat and not bent like a Redneck cap from my generation.

What else is new? I scoured Seventeen and Teen Vogue websites as well, but it seems like they are pushing fashion trends out there, not watching what teens are already wearing. Some other fashion fads–like crinkled scarves, platform shoes, boyfriend jackets, and the resurrection of neon–seem to be less widely worn by high schoolers.

So what fashion do you see in today’s teens? What were the fashion statements of your high school days? How do you think our fashion choices play into how we identify ourselves as teenagers?

P.S. HAIR is not this week. That is a whole other subject which I will cover in another post.