Idioms are one of my favorite things to look up and discover their origins. Idioms are phrases or sayings which have an underlying and generally understood meaning apart from the literal words themselves. For instance, “dead as a doornail” or “break a leg.”

Curiously, we have quite a few idioms which revolve around COLOR. For today’s Amaze-ing Words Wednesday, we’ll navigate a labyrinth of phrases that include colors.

Blackmail. The word “mail” here is the old Scottish word for rent (which actually comes from Old Norse “mal” meaning contract). In the 1600s tenants paid their rent in silver coins known as “white money.” However, the Highland clan chiefs began threatening tenants with violence if they didn’t pay for “protection.” This additional rent soon became known as “black rent” or “black mail” – the opposite of rent paid on the up-and-up. During the 1900s its meaning was extended to the act of demanding money to protect another’s secrets.

In the pink. The phrase did not originate from the color itself. Its first use is found in Romeo & Juliet (1597), as Mercurio states, “Why, I am the very pinke of curtesie.” In this instance and several others, “pinke” meant tip-top, the highest, the peak. Perhaps using the word “pink” to indicate excellence derived from Queen Elizabeth I’s admiration of Dianthus flowers, commonly called Pinks. These flowers are both pink in hue and edged like pinking shears. So to be “in the pink” is to be in the most excellent condition possible.

Green with envy. According to The Phrase Finder, “the Greeks believed that jealousy was accompanied by an overproduction of bile, lending a pallid green cast to the victim.” I have yet to see anyone with an actual green complexion when envy strikes, but it is an effective saying.

Caught red-handed. The phrase “caught red-handed” is first seen in English novelist George Alfred Lawrence’s Guy Livingstone in which the presence of stolen goods caused the character to say, “we were caught red-handed.” In fact, the word “redhand” or “red-handed” had been used since the 15th century and originated in Scotland. It simply refers to having blood on one’s hands, which was proof of involvement in a killing.

Once in a blue moon. While there are a couple of other possible explanations, I’m going with a more commonly accepted one. In 1819, The Maine Farmers Almanac listed dates of “blue moons.” Various moon phrases were given names (e.g., “harvest moon”), and “blue moons” occurred in those years when there were 13 moon cycles rather than the typical 12. The extra moons were called blue. They don’t happen often, of course; thus, “once in a blue moon.”

Paint the town red. In our town, the D.A.R.E. drug awareness program for school is accompanied by an encouragement to “paint the town red” with red ribbons everywhere. However, the theories on where this phrase came from are hardly as innocent. One suggestion is that in 1837 the Marquis of Weatherford and his friends went on a spree in the town of Melton Mowbray and, among other misdeeds, painted it red. Although the event itself took place, no references to red painting were recorded at that time.

Another option comes from The New York Times in 1883 when a reporter wrote: “Mr. James Hennessy offered a resolution that the entire body proceed forthwith to Newark and get drunk… Then the Democrats charged upon the street cars, and being wafted into Newark proceeded, to use their own metaphor, to ‘paint the town red’.” Perhaps the drunkenness is related to a red flush on one’s skin. This still doesn’t explain the phrase’s origin.

A final suggestion was that the capital of the Indian state of Rajasthan was painted pink in 1853 in honor of a visit from Prince Albert. But then, why paint the town red when the building was painted pink?

Red itself often refers to blood, so perhaps the original meaning was to have such a violent spree that blood was spilled around the town. I think I’ll opt for the nice ribbons instead.

Red Herring. A red herring is a misleading clue, usually in a mystery. In the 18th and 19th centuries, herring was common in Britain. This fish was preserved by salting and smoking, which resulted in a deep brownish red color and a strong smell. Early animal-lovers in the 1800s wanting to preserve the fox could throw hounds off the hunt with red herrings.

Tickled pink. The word “tickled” here doesn’t mean to touch someone in a way that makes them laugh; it’s an older usage which means to give pleasure. “Tickled pink” is to be so pleased that you appear pink (as when blood rushes to the skin’s surface). Its earliest written reference was in 1910 in The Daily Review, an Illinois newspaper: “Grover Laudermilk was tickled pink over Kinsella’s move in buying him from St. Louis.” 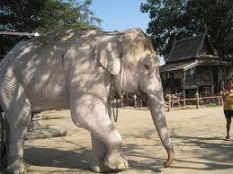 White Elephant. Perhaps you’ve participated in a White Elephant gift exchange, in which you pull out some useless, unwanted item from your home and place it in a pretty gift bag for some other sap. Back when Thailand was Siam, whenever a white elephant was discovered, the king automatically took ownership but not possession. One could not neglect, ride, or work a white elephant, so it was a huge burden to have one. In fact, the king was said to give a white elephant as a special royal gift to those who displeased him. You couldn’t refuse the royal gift, but then you had to take care of said elephant without getting any use from it. Frankly, I’m happy that all of the white elephant gifts I’ve received required no feeding and shoveling.

White knight. In Through the Looking-Glass by Lewis Carroll, Alice is rescued by the White Knight from the Red Knight. He represents the chess piece of the same name. In the tale he is clumsy, but helps Alice nonetheless. Indeed, the term now simply means “one who comes to the rescue of another” (Merriam-Webster).

Yellow-belly. What the color of one’s stomach has to do with one’s level of courage, I’m not certain. There are several theories. However, the most convincing one involved the Texas revolution. The Wisconsin Enquirer reported in 1842 that “We learn from Capt. Wright, of the N. York, that it is the intention of the Texans to ‘keep dark’ until the Mexicans cross the Colorado, and then give them a San Jacinto fight, with an army from 5000 to 7000 men. God send that they may bayonet every ‘yellow belly’ in the Mexican army.” Was that merely a reference to the skin color of Mexicans? I suspect so. Thankfully, such racist tones have not lingered with the use of the term (that I know of). A “yellow-belly” is simply a coward.

What other color idioms can you think of? Why do you think we use color in our common sayings?